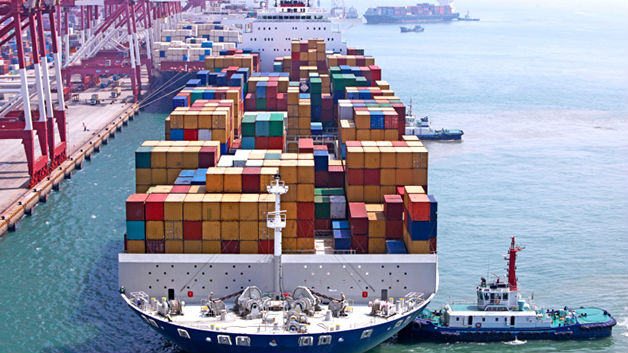 Swim or sink: That’s the message shipping executives in Asia are taking into the new year.
Faced with a prolonged trade slowdown and depressed freight rates, the region’s container lines are set for further consolidation after a year that’s seen the collapse of South Korea’s Hanjin Shipping Co., a mega merger among Japanese rivals and the sale of Singapore’s shipping flagship. With capacity in excess, firms will continue joining forces to cut costs and improve efficiency, according to the heads of A.P. Moller-Maersk A/S and Hyundai Merchant Marine Co.
“It will be another difficult year,” Hyundai Merchant Chief Executive Officer Yoo Chang-keun said in his New Year’s speech to employees. “Global shipping companies are preparing for the long battle in the shipping industry through M&As and government support.”
An overly optimistic outlook of trade recovery following the 2008-2009 global financial crisis prompted shipping companies to order ever-larger vessels, with some stretching longer than the Eiffel Tower. As capacity piled up, the companies tried to under-bid each other on freight rates to lure clients, causing levies to drop to unprofitable levels and sinking the global container-shipping industry into losses.
“The old model of growth through acquiring new capacity, building new ships is not working any longer,” Soren Skou, chief executive officer of Copenhagen-based market leader A.P. Moller-Maersk A/S, said in a Bloomberg Television interview in December. “There are a number of players in our industry that have not been profitable for a long stretch. So I see consolidation continuing.”
Pointing to an imbalance in supply and demand that has destabilized the industry and created an environment which is “adverse to container line profitability,” Nippon Yusen KK, Mitsui O.S.K. Lines Ltd. and Kawasaki Kisen Kaisha Ltd., Japan’s biggest shipping companies, agreed in October to combine their container-moving businesses, with the joint operation targeted to begin in April 2018.
CMA CGM SA, the world’s third-largest container-shipping company, bought Singapore’s Neptune Orient Lines Ltd. in early 2016. China merged its two shipping groups — China Ocean Shipping Group and China Shipping Group — in late 2015, forming China Cosco Shipping Corp., Asia’s biggest container line.Hanjin, once the world’s seventh-biggest container-shipping company, sought court receivership last year after creditors ended all funding support and the government decided not to intervene. Korean rival Hyundai Merchant was taken over by lender-banks as part of a creditor-led restructuring.
Topping a year of mega mergers, Maersk agreed in December to buy Hamburg Sud. Maersk will focus on integrating the German company before looking at other deals, CEO Skou said at the time.
Industry spotlight will turn to a possible merger between Taiwanese shipping companies such as Evergreen Marine Corp. and Yang Ming Marine Transport Corp., or a buyout of Hyundai Merchant, according to Kim Tae-il, a research analyst at the Korea Maritime Institute.
“Hanjin’s demise brought forth the urgent need for industry restructuring,” Kim said. “Through mergers and acquisitions, there will be fewer players and they can stop trying to undercut each other.”
Hyundai Merchant will focus on improving competitiveness of its existing operations, a spokesman at the Seoul-based company said in comments requested for this story.
Evergreen adopts a strategy of organic growth and has no plan for mergers or acquisitions, the company said in an e-mailed response to Bloomberg News.
There are no plans to merge with Evergreen, Yang Ming Executive Vice President Winsor Huang said by phone. The company, which gained shareholder approval in December to cancel some stock and sell new shares, is working hard to improve its finances, cut costs and enhance efficiency, he said.
Spot prices to transport a 20-foot container to Europe from Asia continued their annual declines, falling 5 percent in 2016, Shanghai Shipping Exchange data showed. A reduction in the number of container lines could help the companies push up freight rates, said Jason Chiang, a Singapore-based director at Ocean Shipping Consultants.
Global shipping lines are projected to report a loss of $5.2 billion in earnings before interest and taxes in 2016, the worst since 2011, according to Drewry Financial Research Services Inc. The International Monetary Fund estimates that world trade will climb 3.8 percent in 2017 after expanding last year at the slowest pace since the global financial crisis.
“There will be a lot of changes in the global shipping industry as challenging times continue,” Hyundai Merchant CEO Yoo said in his Jan. 2 speech. “While we could see some improvements, it’s not easy to predict when there will be any meaningful recovery.”
[bloomberg]
Asia’s Shipping Lines, Container, Shipping News, Slider, The Wire
Previous Post
Next Post
Posted in: Blog