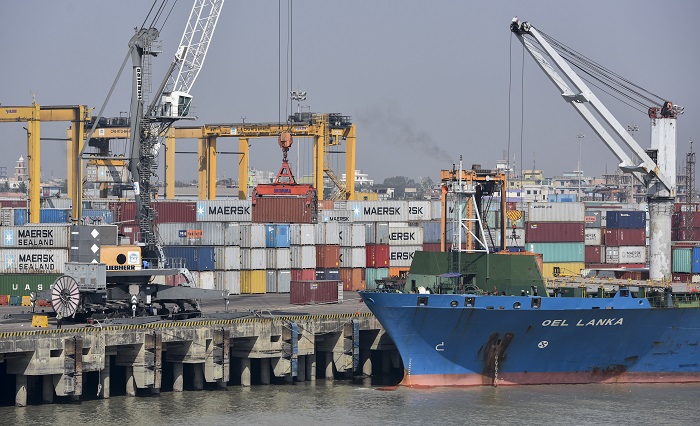 Interested in sharing JOC.com content? Please view our current Copyright and Legal Disclaimer information, as well as ourFrequently Asked Questions to ensure proper protocol is followed. For any questions, contact the Customer Support team at our Help link.
Chittagong port within a year will have enough cranes and other equipment to fully support its terminal operations, a move that will decrease port congestion since only 80 percent of terminal operations are supported with needed equipment.

Inadequate equipment has been a major shipper complaint in this busy and congested port for the past decade, but now it appears the port authority has taken steps to address the problem by adding equipment in the last few months.

“My target is to maximize productivity by bringing more than [the] required [amount of] equipment,” Aziz said.

He said if an additional 20 percent of equipment is available on standby, port operation/productivity would not be reduced when current equipment is removed from production for maintenance.

On the other hand there are 34 mobile cranes, 132 forklift trucks, 11 industrial tractors, five heavy trailers, and 30 light trailers, among other pieces, for general cargo handling.

Aziz said that of the newly bought ‍six QGCs, five have been installed in the new mooring container terminal (NCT). At one jetty, three cranes are now handling containers to evaluate whether they will increase productivity.

He said the NCT will need four more QGCs, which under the new plan included buying equipment for next year. The Chittagong Container Terminal (CCT) will also need QGCs and other equipment.

From a previous procurement order of 10 QGCs, six are already in operation, while four more are scheduled to reach the port in February.

Aziz said construction of Patenga Container Terminal (PCT) is under way, while preliminary work for the Bay Terminal started after inauguration of work by the prime minister in early November. The Bay Terminal will have 13 jetties and vessels requiring less than a 12-meter (39-foot) draft and less than 280 meters in length will be able to anchor there.

“We are preparing to buy equipment for these terminals too,” Aziz said.

CPA chief engineer (mechanical) Nazmul Hoque is heading a committee to determine the amout of equipment needed for the existing and under-construction terminals. He told JOC.com the existing equipment covers almost 80 percent of the needs at the country’s prime seaport.

“But we need more equipment, as the port sees nearly 12 percent growth every year and new terminals are also under construction,” Hoque said.

According to his preliminary list, five RTG cranes, three rail-mounted gantry cranes, 19 straddle carriers, four reach stackers, two container movers, 12 20-ton mobile cranes, and 28 10-ton mobile cranes will be needed, among others. His committee is working to finalize the equipment purchase total to be bought in 2019.

Explaining in number, he said, these jetties had been handling 1,600 to 1,800 TEU of containers in 24 hours; with the new equipment, they are now handling 2,200 TEU in 24 hours, adding that he expects productivity to increase more, once equipment is upgraded throughout the port and operations work at the same pace in a synchronized manner.

A senior port official told JOC.com with the newly installed QGCs, about 20 to 25 TEU can be handled per hour. He said cranes in geared vessels could handle only 15 TEU per hour.

“Since the QGCs can handle [an] increased number of containers, the productivity of the port will definitely go up significantly now,” he said.

Interested in sharing JOC.com content? Please view our current Copyright and Legal Disclaimer information, as well as ourFrequently Asked Questions to ensure proper protocol is followed. For any questions, contact the Customer Support team at our Help link.